A friend of mine had in 2014 decided that to solve the issues with his tap water was to lower a plug down into the water well, the idea was that it would separate the surface water and the clean water from the bottom of the well.

This might have been a good idea in under certain unknown conditions that didn't apply to my friend's other unknown conditions. The reality was tho that no noticeable difference in water quality was detected, and a water filter was applied to correct the issue instead.

Now tho it was decided that after boosting up with some sushi so hell yeah we were gonna remove this for the situation useless piece of plastic plug that was sitting down in his water well.

So off we went from the patio down to the lawn and the well cap, quickly dismantled the wellhead and started pulling on wires hoses and all kinds of things that were visible from the detached wellhead, with absolutely no progress whatsoever.

Pictures that were taken at the time of lowering the plug into the well was consulted witch lead to more random pulling of various wires and hoses. 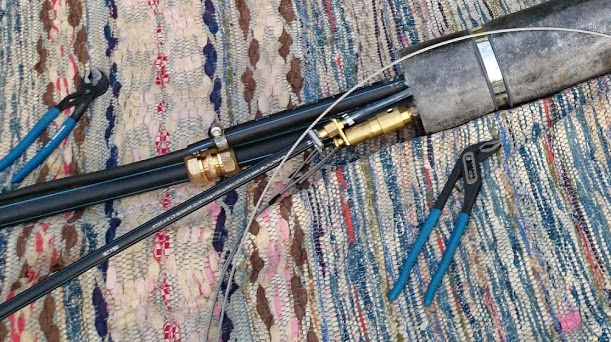 Finally, the brilliant idea surfaced, that the water pressure might have to be lowered in the system for the plug, not to auto swell and plug up the well real good, might also have been that the shoe connection was stabilized by the pressure and resulted in a really thick and sturdy hose down the hole was next to impossible to move, whatever the problem was with the lowered water pressure the plug gave, at least with some extreme effort.

After about 15 minutes of pulling with about 30 cm of progress of the plugs 17 meter depth, it was decided that we had to use more brains and less brawn. It was thought that the wires that were attached to the plug somehow (it was rather unclear from the old picture how this attached) were a better alternative to the thick wet slimy slipper hose. Pulling on the wires where extremely uncomfortable with our bare hands tho so this method was given up before 1 minutes of torment had passed.

A quite unorganized search for something made of wood that could possibly alleviate the situation or at least give us a moment of respite ensued. after about 5 minutes 2 1 meter length pieces of quite sharp-edged wood was found that we wrapped the wire up into. That with a combined effort and moderate paint we managed to pull the plug up the well hole its 17 meters.

What next, my friend promptly proclaimed I'M THIRSTY, me shaking my head and concluding nope there is no solution to that problem at the moment. Disappointed by this and all filthy from the slime and slipperiness of the hose that had been quite unwieldy during the entire unearthing he instead concluded that washing his hand was at least a good idea until realizing nope that didn't work either without water.

There of course had been no foresight at all in this project so no water had been bottled or otherwise stored away before the project began.

So filthy dirty and thirsty we decided there were no choice but to continue, looking down at the now 17 meters of hose that was decided to be removed and the hose connections were to be reused we began dismantling it. Two pipe wrenches were quickly located and laid out next to the connections (every man knows exactly where two pipe wrenches that hasn't been used for 4 years are its part of the manly man skills every man possesses) With less manly man skills we finally undid the connection nuts... but ... the connection stayed stuck even after completely loosening the nuts. After several minutes of banging and pulling on the connections a better plan was concluded to be needed.

We surmised that one of the connections was a sorta plasticly and not as manly looking as the other ones, so this was the one we decided it could not be that stuck. The big water hose was cumbersome tho, so we sawed it off quickly with a wood saw (are there such things as a proper plastic pipe saw?)

After that we had the hose fitting in our hands with a 4cm long hose pipe stuck to it, so into a cramped shed we went with it determined that this was gonna be no issue to resolve, after 30 minutes of continued sawing hammering and application of various wrong tools for the job we managed to get the connection free it looked like shit, and we concluded that it might or might not work but at the moment there was no water and it wasn't stuck to anything so we couldn't really do anything but progress onwards.

We took a break here disassembling hose connections is quite a job ... at least if one has no idea how to do it properly tho suspecting the proper way to do it is to buy new ones.

So then we decided the sawing was fun so we sawed off the hose again below the plug this time and worried about how we were going to fit the connection that looked way too small for the hose now. After some good mixing with the nuts and some heated discussion about what nut matched with what connection we decided to start the fitting process by some more discussion what way of the connection goes in what direction. After some proof of concept assembling without a pipe we agreed on one specific way and fitted the connection.... without the nut first being on the hose, those damned things really sticks to the hose when you put them on so after another 5 minutes we got it off this time probably easier when it hadn't been compressed quite so well on the hose, and we fitted the nut before the connection and then quickly assembled the hose to the shoe connection of the well with some more manly man usage of the pipe wrenches.

With some more pondering about how the electric cable down to the well pump was supposed to be freed from the plug we managed to cut it up and reconnect it to the well, 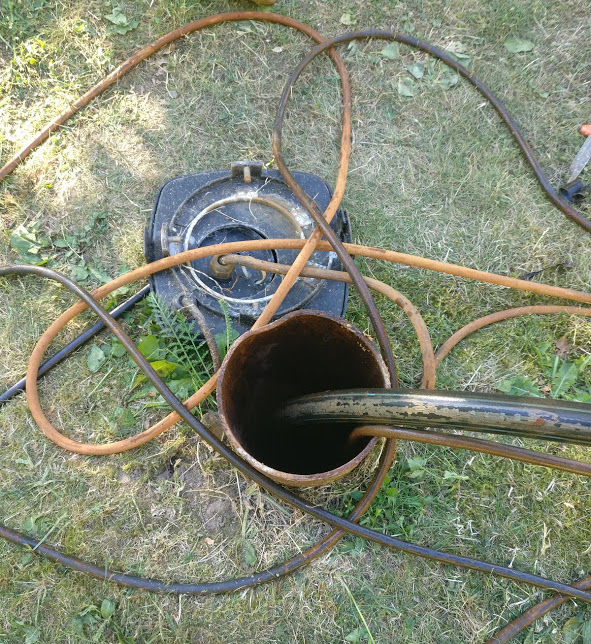 After all that was done we decided that now everything was compleat and we just had to lower the hose down onto the shoe connection and everything would be awesome and manly sense of accomplishment could be felt. So promptly without to much thought we lowered down the hose and tried to fiddle it on the hose connection, during some of this the o-ring seal fell out of the shoe connection and down into the well, so now the well could double as a water fountain with water coming up out of it in a bit of chaotic stream with some dependence on how much of a pressure the pump managed to push into the system.

Admiring the new water feature in the lawn of my friend he began storytelling about how hard it was to acquire a new seal because the last time 4 years ago a quite similar thing happened then instead of it falling off it was sheared off by the connection. How he had managed to convince his wife to go to the local pipe shop that sent her of to some other shop managing to convince them that yes she wanted the seals and no she wasn't a company but wanted them anyways and finally managed to acquire the seal that fit that we now had dropped down the well.

Some seals not meant for the purpose was found and try fitted that at most just managed to change the angle of the water feature.

A proper seal was acquired by my friend, for some reason the wife had not gotten involved in the acquiring of it this time. 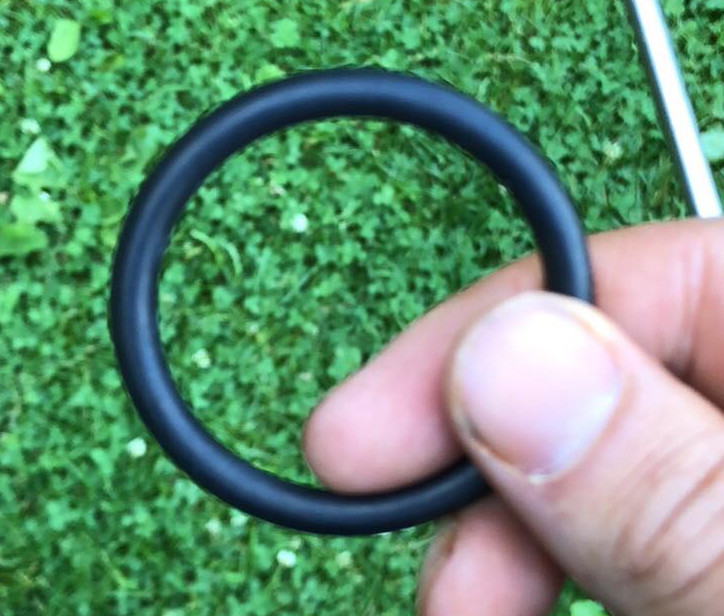 Now fitted and in use it all seemed to be working correctly.

Who knows what the next adventure with the well will be, this is not the first and probably won't be the last.